Prepare the project
The rendered result depends on the correct configuration of the project file. To avoid errors and unnecessary expenses, carefully read the recommendations for each software that you used for your project. Lacrimas Farm is not responsible for the result of the project rendered without appropriate configuration.

C4D
Houdini
Blender
Maya
3d Max
Select the software in which you created your project, and in the list below you will find solutions to the most common errors:

After Effects
Collect
Naming and project structure
Optimization
1. Scene collection
a) check what fonts you used in the project, and copy them manually to a separate folder, calling it Fonts
b) make a collection for the selected compositions.

An AE project can contain dozens of compositions, of which one or two are required to render. In order not to save, and then upload unnecessary gigabytes to the server, you need to understand what compositions you want to "put together" and, before this procedure, select them in the Project panel After the necessary compositions are selected, we proceed directly to the creation of the collection of our project. 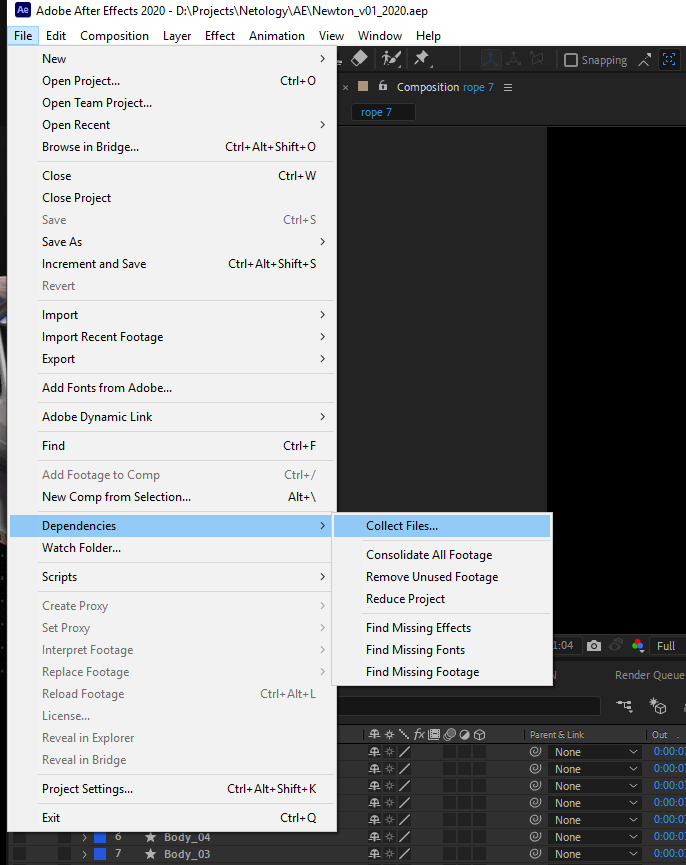 select the File section of the main menu, the Dependencies section and select the Collect Files command 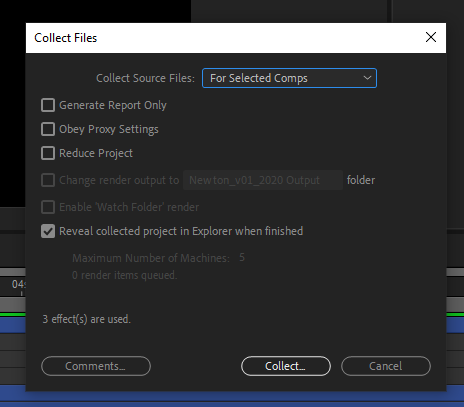 we set "For the selected compositions" in this case we will not upload unnecessary data to the farm, which has a positive effect on the speed of obtaining the material and reduces possible errors when setting up for rendering. Press the Collect button and specify the folder into which our project will be copied to send to the farm. 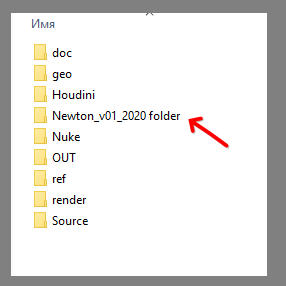 Pay attention - AE ascribes at the end of the Folder - it is better to leave it as it is - from this postscript it is usually immediately clear that this is a collection of the AE project.
Send to the render queue only those scenes that need to be rendered, clean the rest in the render queue

2. Naming and project structure
All files and folders of the project must be named in Latin characters, without special characters and without spaces.
As_separator_use
_underscore. 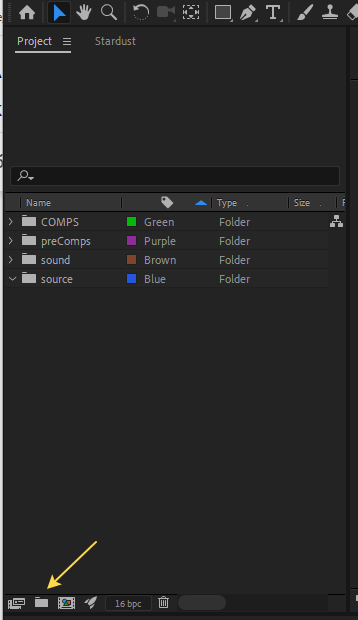 The organization of the project structure and naming can be almost any, there are only 2 requirements:

Above is a screenshot of how you can organize folders - no need to attach a folder to a folder, or 15 different folders, you will be tortured to create and decompose them. and after a couple of months, stop putting things in order altogether. keep it simple and simple, it works. 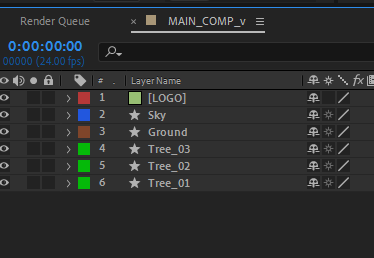 It's the same with layers - the color of the layers is also set manually and this helps a lot to distinguish them in the timeline.
Organizing your project well will help you keep things complicated.

In a composition, it is convenient to work with a limited number of layers, empirically this number is close to 80-100 layers, no more. Obviously, detailed projects require more and the way out of this situation is simple. encapsulate, merge elements according to some criterion into precompositions. A tip is to move these precompositions to a separate folder in the Projects panel.

How to create subcompositions:
a) select the layers that are convenient to move into a separate sub-composition
b) press the keyboard shortcut CTRL-SHIFT-C
c) write the correct simple name of the song 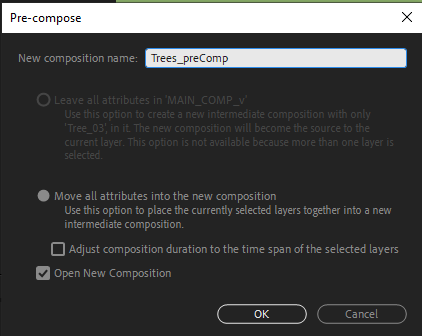 3. Optimization
Once upon a time, this option helped in the work, but those days are long gone .. And we just recommend, in order to avoid "glitches" and strange behavior of the project, turn off caching to disk. 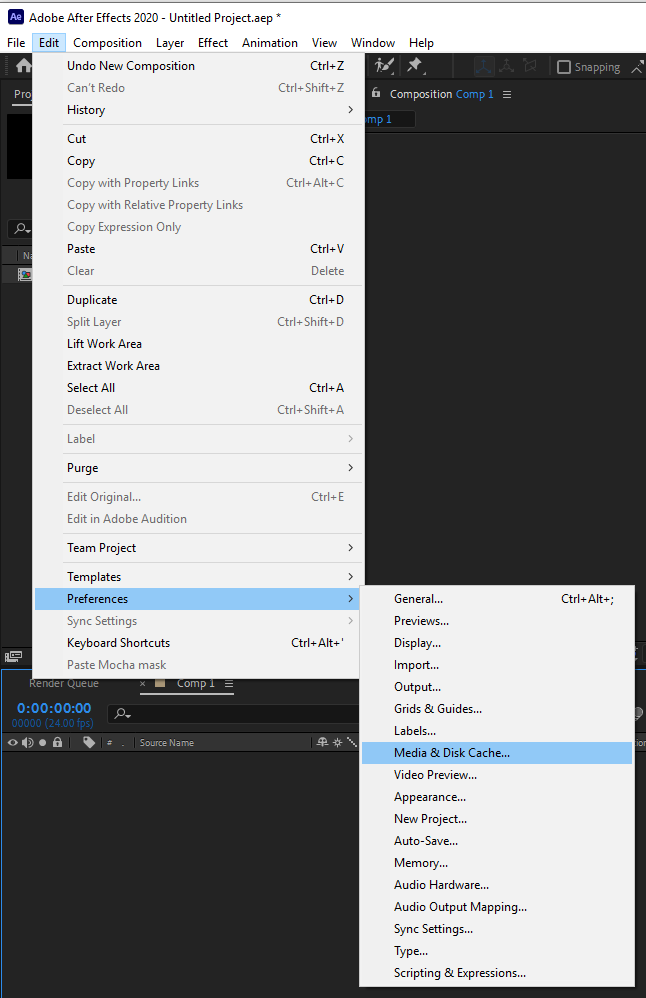 Check which plugins you used in the project and voice the names and versions in the chat to the manager. Copy distributions, if plugins are not installed on the farm, to the Plugins folder

We all love wunderwaffe, so that we can sketch something drafted, press a couple of buttons and sit and rejoice at how beautiful it turned out. and the client is satisfied and paid the money .. but! this dream in reality leads to the following. AE users stuff their projects with a large number of plugins - in half of the cases, and in more than half, they do it completely unreasonably, and often just to the detriment of the project.

Magic Bullet Looks - all we use to paint a picture quickly, right?
but this plug was relevant in the days of 8-bit compositions and now it can work out ACES color and other modern bells and whistles of color profiles rather clumsily.

There is already "in the package" with AE - Lumetri Color and at the very top this Lumetri has a line for loading the cube LUT. 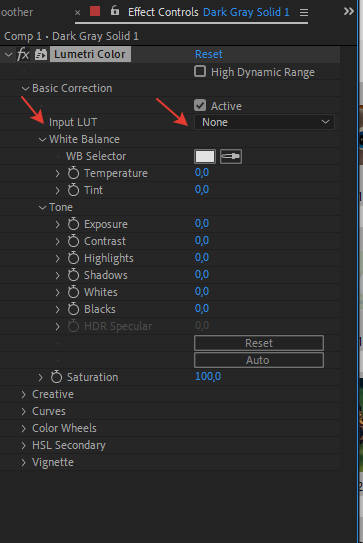 having downloaded a pack of these same LUTs you will get the same Looks. native fast and correctly fulfilling 8 16 32 bit compositions.

for example here or somewhere else there are a lot of them on the Internet. but no, the designers persistently continue to use this anachronism, and if, for example, it is not on the farm - that's it. count in vain rendered.

You need to make a stream of snow quickly. The standard output is Particular or even Stardust. Both of these plugins give excellent results, but AE immediately includes the "built-in" CC Snofall, and it's not difficult to wind up in the same CC Particle World when it comes to snow. But both built-in solutions are simple and lightweight, while Stardust and Particular can greatly slow down the render times of your project ...
Shapes
Using shape layers instead of vector layers. One of the common methods for working with After Effects is to create a static composition for each shot or scene in Adobe Illustrator and transfer that to After Effects for further animation. The method is very working and has the right to life, but I want to warn against its thoughtless use. The fact is that the developers have increased the processing speed, optimized the work and equipped the type of layers called shape layers with cool functions.

Alas, without additional manipulations, automatically, when importing graphics from Illustrator, we get the so-called vector layers, a very strange solution, but alas it is ...

You can use Motion Tools 2 and Turbo Tool to translate vector layers. The Motion Tool has a cool convert to shape button 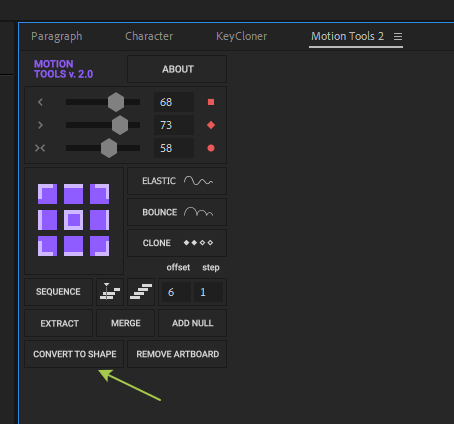 with which you can convert a vector layer to a shape layer.

Also in Motion Tools, you can use the Extract and Merge buttons to split shapes into separate layers or assemblies from several shape 1 layer. In the Torbo Tool, a useful button is to convert groups to shapes. 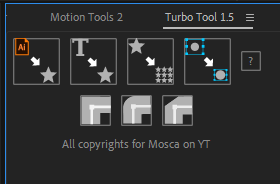 with the help of these tools we convert "non-native" vector layers into powerful pumped AE shape layers and get flexible functionality and high rendering speed of our compositions. Successful projects and grateful clients!
Main page
Send a request